Posted by MACH Acoustics
1st October 2010BB93, Case Study, Cross Ventilation, NAT Vent Attenuator
MACH Acoustics worked alongside B3 Burgess Architects and developed one of the first schools to be cross ventilated post the introduction of BB93.  The proposed veneration scheme is shown below, as can be seen to this drawing two rows of classroom block were located either side of a large teaching atrium. 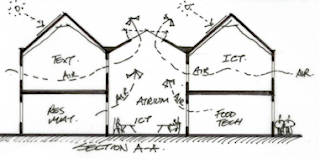 The proposed detail on the first floor was to place the attenuators at and angel following the roof line.  As in the case of  London and West London Academies, the attenuators were placed over cupboards.  The ground floor detail was made simpler since a flat slab was available.  The design of the attenuator was boosted by the fact that the air could also pass through a relatively large service void, which further enhanced the acoustics performance of the ventilator.

The result was a naturally ventilated school that still achieved BB93; considered impossible by many before this project. The school had a light and pleasant atmosphere, thanks to the well thought out ventilation strategy and central atrium.