In the same way that a Honeycomb Attenuator can be incorporated into the façade of a building it is also possible to install the attenuator under a raised floor system. The vent openings are made within the spandrel panel between transoms.

Air passes into the cellular space by entering through an external vent opening via the Honeycomb Attenuator. With the floor void being used as plenum, air then enters the rooms above by means of floor diffusers.

This is a very effective way of dealing with high noise levels. Not only this, but the system can also be used to cross ventilate rooms at the same level or between levels. 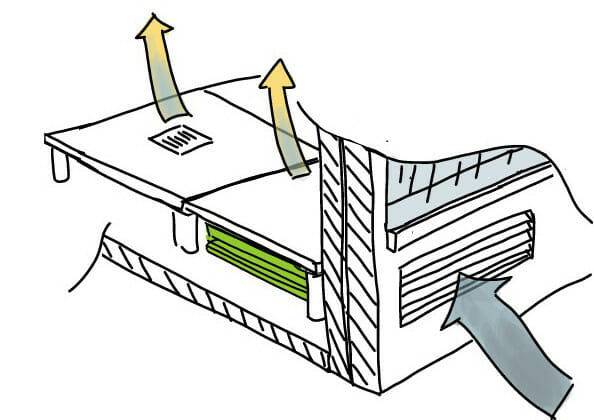 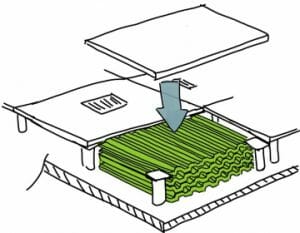 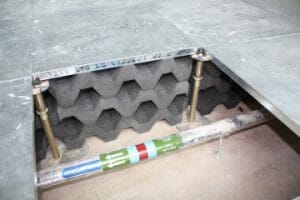 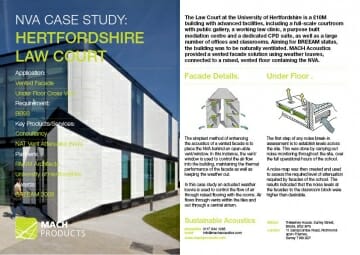 The vent openings are made within the spandrel panel between transoms. Air passes into the cellular space by passing through a external vent opening through the Honeycomb Attenuator. The floor void is used as plenum – air enters the rooms above by means of floor diffusers. MACH can design the Honeycomb Attenuator around your choosen flooring, such as the Kingspan modular system – enabling the attenuator to follow the grid formation.

Due to the bespoke nature of the Honeycomb Attenuator, it can be simply installed in coordination with a modular grid based flooring. The attenuator’s segments are slid into place between the pedestals (1/4 circle sections were added to the corner profile to account for the structure), followed by the matching 600x600mm floor sections.

Building services often exist within the flooring void, including a heated element in this case. The Honeycomb Attenuator foam can be easily adapted on site to accommodate for these items, unlike a common pre-defined attenuators.

Underfloor areas typcially have building services running through them. The Honeycomb Attenuator foam can be simply cut to accomdate these services, saving construction time and costs.

The Law Court at the University of Hertfordshire is a £10M building with advanced facilities, including a full-scale courtroom with public gallery, a working law clinic, a purpose built mediation centre and a dedicated CPD suite, as well as a large number of offices and classrooms. 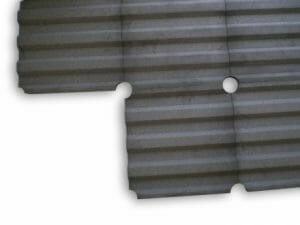 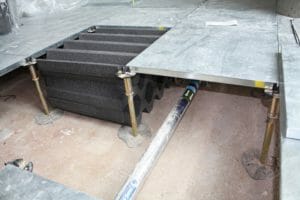 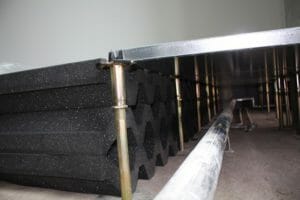 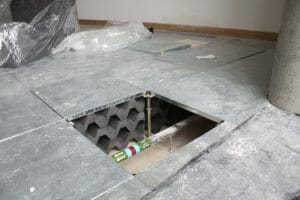 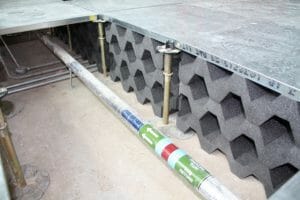 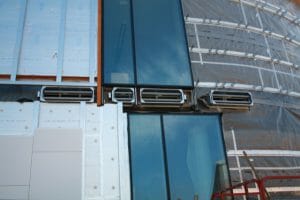 During the colder months natural ventilation has a significant short fall in the fact that heat is lost through opening in the buildings facade. As such there is a trend to move towards heat recovery; recycling the warm air within a building.

To employ heat recovery, air is collected at a given point within a building – typically the top of an atrium or at the end of a circulation zone – air it is then pushed back through the building into the cellular space. To reduce energy consumption it is vital that the air path proveds as little resistance as possible to the movement of air. The drawback of these low pressure ventilation paths is that they have the potential to allow the passage of sound through the building. The low pressure drop, bespoke nature of the NAT Vent Attenutor is an ideal way of resolving this matter. 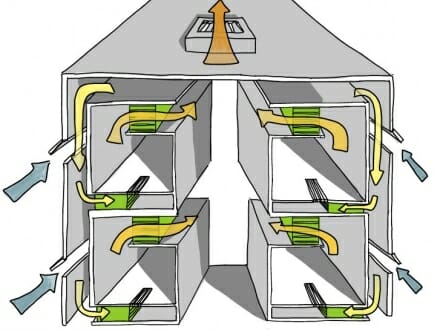